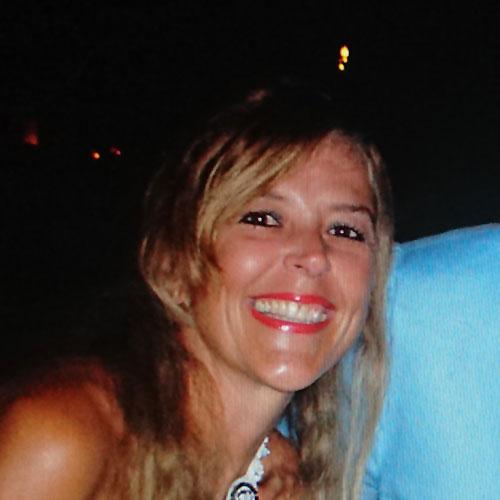 Captain Troy has a 500 ton USCG Masters license and is also a licensed private pilot and Seaplane pilot. He has cruising knowledge of the inter-coastal, from Connecticut to Florida, the coastal waters of South Florida and the Keys, the Bahamas, especially the out islands, and the Caribbean islands as far as Venezuela. He is qualified to maintain Detroit Diesels, and has extensive knowledge of all the systems aboard Lucky Dog.

‘Admiral’ Winnie is a cordon Bleu ( Ecole de Gastronomie Francaise, Ritz-Escofier,Paris 1993) trained chef, and experienced mixologist for your cocktails, having owned and operated a successful restaurant and bar for 10 years. She also has her STCW 95 maritime certificate.

Following is an article written for the All At Sea Magazine, by Nancy Terrell, who we met in Venezuela in 2009.

When I first met Troy and Winnie Standish on Lucky Dog, I couldn’t believe that two people could turn a 1980 80’ Paasch raised pilothouse motor yacht into such a comfortable home.

Troy Standish, from Poole England, has been on the water all of his life in power boats; Winnie, a native of southern Florida is an also a diver, swimmer and water sport enthusiast.  After meeting in Spain on a holiday in 1994, they married and moved back to the states where Troy had a 17’ Mako in the Keys.  They soon traded up to a 30’ center console Century boat named Tequila Dream, kept it for three years and upgraded again to a 39’ Topaz named Lone Wolf.  For seven years, they loved living aboard and cruising the Bahamas when not working.

They had purchased Kings Head Pub on Dania Beach and turned it into one of the hot spots of the Ft. Lauderdale area—so successful that in 2005, with an offer to sell that they couldn’t refuse, they began looking for one last upgrade—to a large power boat and a retired life of cruising.

Troy had looked for boats all through the millennium and beyond.  Doing the sensible thing he hired a broker and only went to see what was suggested.  However, an ad in a boating magazine fascinated him, so he, Winnie and a surveyor flew to Connecticut to look at Lucky Dog (then named Elan).  It was love at first sight.  Troy’s broker tried to convince him that there was too much wrong—but you know how love is.  Troy’s low bid, pointing out the neglect and nonworking areas of the boat, was accepted, saving him 30% off the asking price.

The next two months were a labor of love and devotion.  Since the two could not leave their restaurant at the same time, Troy and Reno the dog headed up to Connecticut to live aboard, so he could do necessary maintenance and repairs, replacing all of the hoses and impellers, while Winnie ran the King’s Head.

Lucky Dog has Z Drives designed by Rolls Royce and Troy got specs from the company so he could work on them.  The hull originally was built for the Navy in Lake Erie until the project was canceled due to budget cuts, and the boat was instead finished as a yacht.  There were originally five hulls; now there are only two. 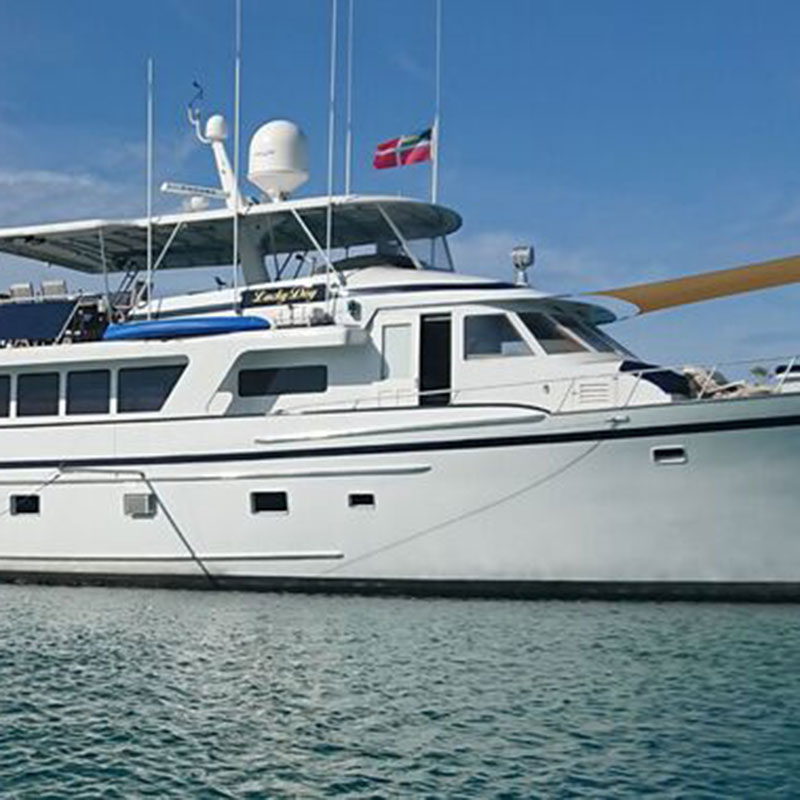 Winter had set in and it was cold in CT.  Winnie drove up, with a captain friend and live-aboard supplies, and the four headed south to Florida.  After their friend left in Atlantic City, Troy and Winnie headed out without a dinghy, through winter seas and storms, stopping each night to tie up wherever.  By the holiday season they were on the Inter-coastal, spending daylight hours avoiding barges and navigating bridges, and pulled into Lauderdale just in time to be a part of the holiday Boat Parade.

Lucky Dog went onto the hard at Harbor Town Boat Yard, Dania Beach, where Troy spent three months working on the exterior – filling, faring, sanding, and painting.  He added two feet to the transom with a hydraulic swim platform that lifts up at night, affording them extra safety protection.  They built in steps for Reno the dog, and added a 60’ Bimini to their top deck, making it a “Party Hearty” locale for entertaining.

The couple moved Lucky Dog to the dock behind their home on a canal, where the next eight months were spent in electronics and an interior refit.  All of the headliners and walls had to be removed for extensive wiring.  Troy installed three GPS systems, three SAT NAVs, two radars, a new SSB, two VHFs, forward looking sonar, a Bluewater Anchor Alert System and Koopnautic active fin stabilizers.

The boat now has an impressive SAT TV & sound system throughout the interior and security cameras exterior.  The system is totally integrated into the entire yacht and can been seen from each room including the master stateroom TV, electronically hidden behind a gorgeous oil painting.  The entire system is duplicated on the fly bridge.

The galley is state of the art—as gorgeous and functional as any of the huge mega-yachts I have seen after 15 years of boat shows—with a commercial sub-zero stainless refrigerator and a matching freezer, granite counter tops, micro-convection and regular ovens, a disposal, ice-maker, trash compactor and more.

After three years of cruising in the Caribbean, “We have now finished exploring the Venezuela mainland and are headed out for Tortuga, Los Roques and Los Aves; we will continue west to the ABCs and Cartagena,” Winnie tells me.  “Before going through the Panama Canal we will also visit the San Blas Islands. Our plans after that will probably be to continue up to the Sea of Cortez and on through the Pacific, or maybe even backtrack and go to the Med.  If we accomplish this we will certainly consider ourselves Lucky Dogs!”

Nancy Terrell is a freelance writer who has lived in the Caribbean for 23 years.  She holds a Master’s Degree in Literature and is currently cruising on her trawler, Swan Song, throughout the Caribbean. (now in Hawaii)

READY TO START YOUR ADVENTURE?

If you fancy cruising around the Bahamas in this beautiful yacht, either give us a call or contact us through the website...